On June 4, 2021, “Hoshino Resorts KAI Beppu” will open in Beppu Onsen, Oita Prefecture as the 18th property of the KAI brand. Following “Hoshino Resorts KAI Aso” in Oita Prefecture, and “Hoshino Resorts KAI Kirishima” in Kagoshima Prefecture, it will be the third property in Kyushu. The interior will have cobblestone alleyways and an arcade area, which will be reminiscent of a lively hot spring town. All guest rooms will be a KAI Signature Room, where local culture and characteristics of the region are reflected and to support local Bungo tie-dyeing techniques and artists, their works will be incorporated in the rooms. In addition, the design is done by the architect, Kengo Kuma. 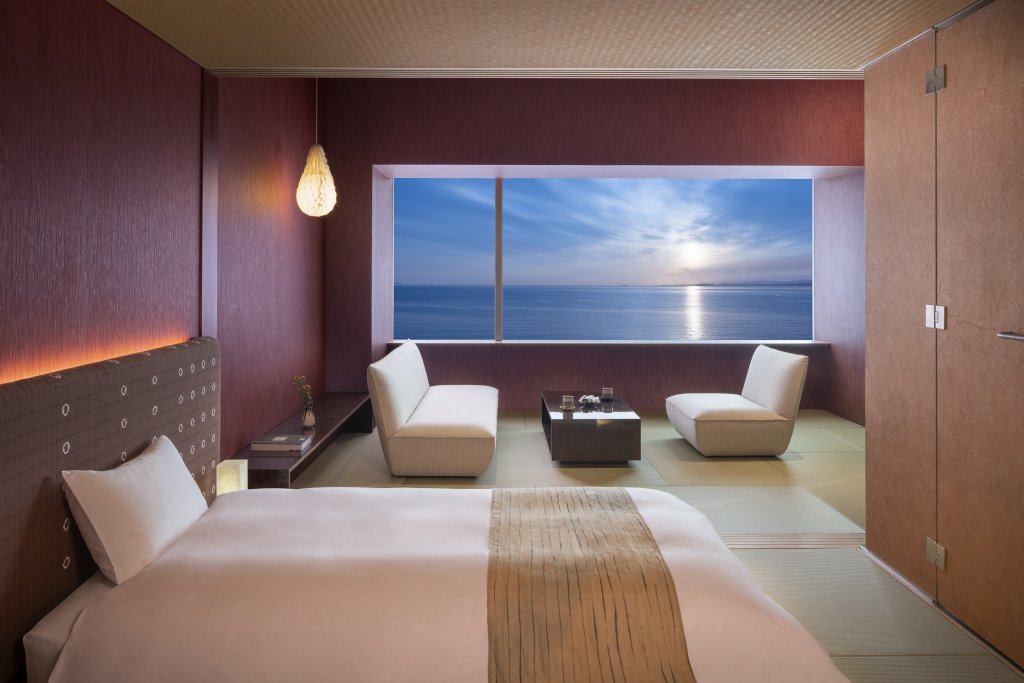 Beppu is an area famous for its hot springs, where it is a place that has the greatest number of hot spring sources and amount of hot spring water in Japan. KAI Beppu is located in the Kitahama district, which overlooks Beppu bay. Since the opening of the old Beppu port back in the Meiji period, many hot spring lovers from all over Japan were able to visit this historical area. Beppu became a renowned hot spring town of Japan; full of life both day and night. The interior will be structured in a way that is reminiscent of a lively hot spring town, full of entertainment and so it will incorporate cobblestone alleyways and arcade areas.

Interior design that is reminiscent of a lively hot spring town 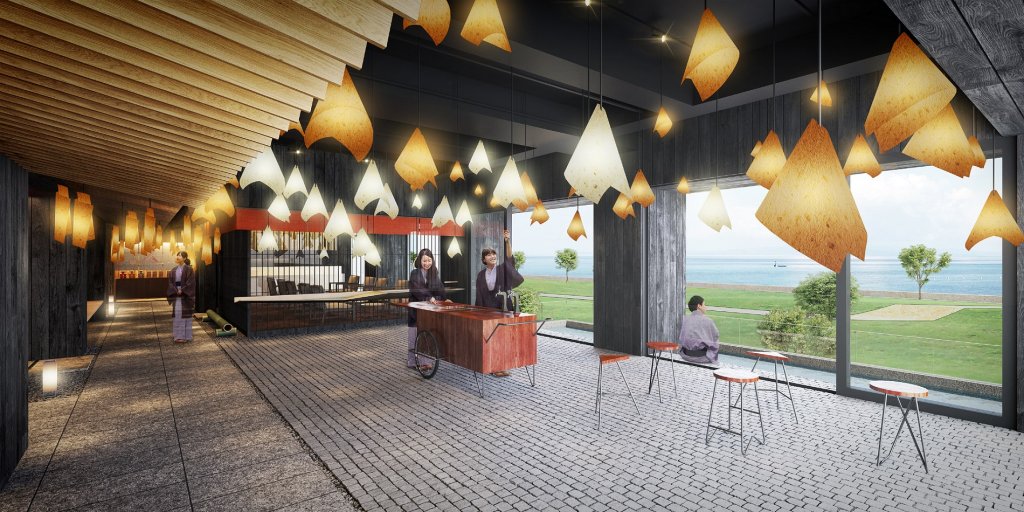 Once you step inside the building, there will be an open terrace overlooking the Beppu bay, which is connected to the lobby. A footbath is located on the terrace, where one can relax as the sea breeze passes by. At the back of the lobby, there will be a cobblestone alleyway, illuminated by Japanese paper lanterns, shops with specialty products of Beppu, and an arcade with traditional games, creating a festive environment. Further along the alleyway, there will be a bathhouse where the baths are separated by gender. The famous Beppu hot spring water can be enjoyed in the baths for pure relaxation. 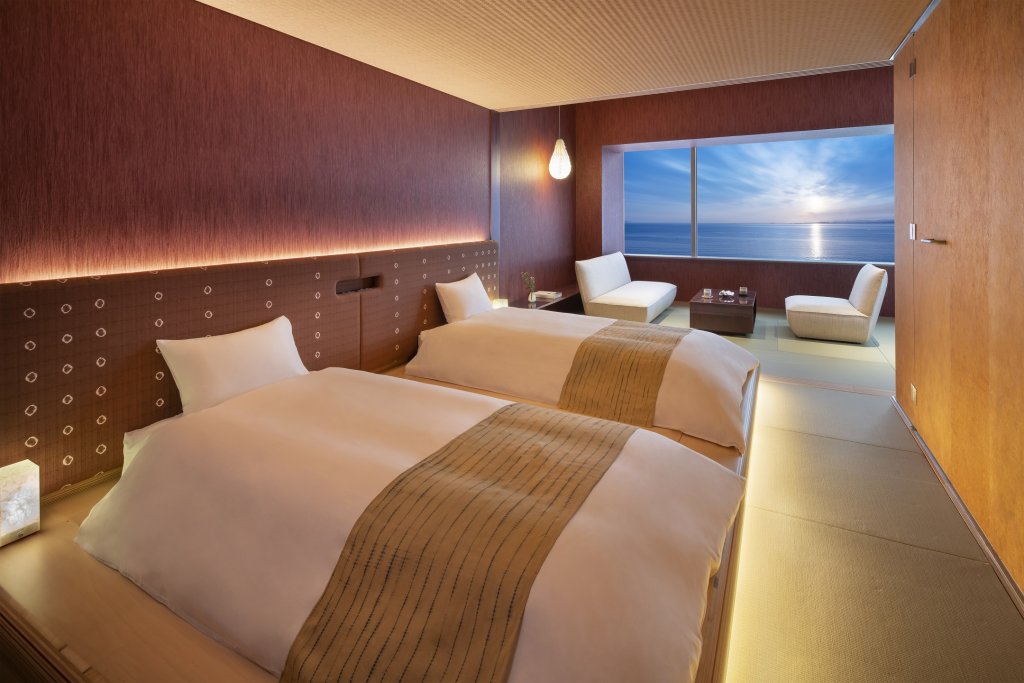 All guest rooms at KAI Beppu will have an ocean view. One of the characteristics of the room is that it features a “picture window”, where the view of the sea is “cut out” as if it is a painting. In order to enhance the color of the sea, the walls, shoji doors (paper screen doors), and glass in the bathroom all incorporate a pink-brown color called Kakishibu (directly translates to bitter persimmon). This Kakishibu color is inspired by the red color of the Chinoike Jigoku (Bloody Pond Hell) in Beppu, and the earthiness of the lava plateau, where the hot spring is found.

All 70 guest rooms will be KAI Signature Rooms. One feature of the KAI brand is its inclusion of regional culture and handcrafts in the rooms. At KAI Beppu, Bungo tie-dye fabrics will be used for the headboards and foot throws.

Tie-dye artist, Hiroko Ando
While working at Aichi University, I accompanied an investigation of the local industry in Arimatsu and Narumi area of Nagoya and learned about the technique of Bungo tie-dyeing technique. Although we started the investigation in Oita, which is my hometown, there were very few people who knew about Bungo tie-dye so about 30 years ago, we opened the “Yusoukai” in the hopes for more people to be aware of this local dye technique. Currently, while working on my own projects and workshops, I am involved with the production of the KAI Signature Rooms.

Inside the KAI Signature Rooms at KAI Beppu
Headboard 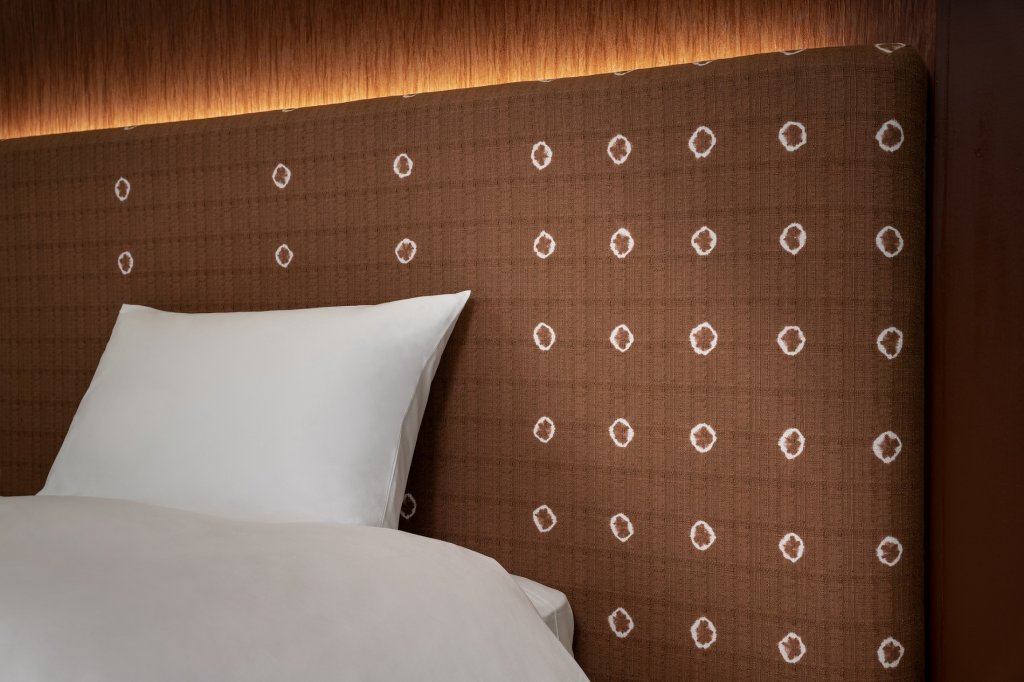 The thick cotton is finely squeezed, creating a simple and powerful expression. The Kakishibu color, pink-brown color is the main color of the room. 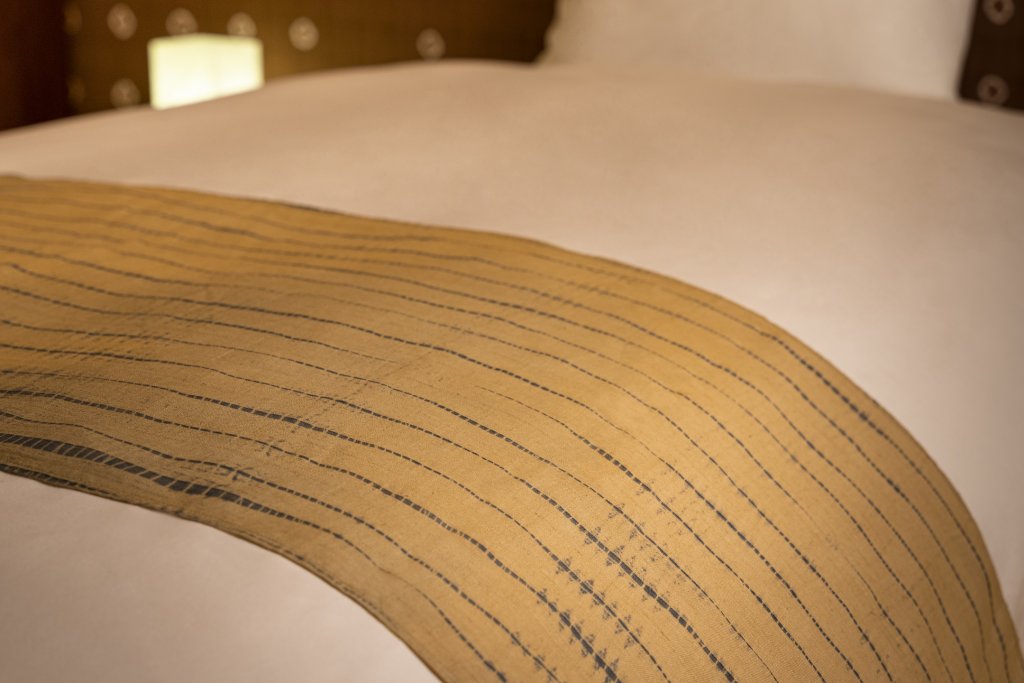 Inspired by the sea, a specific technique was used to create a streak pattern on the fabric. Creating vertical lines/streaks can only be done by a craftsman with expertise. 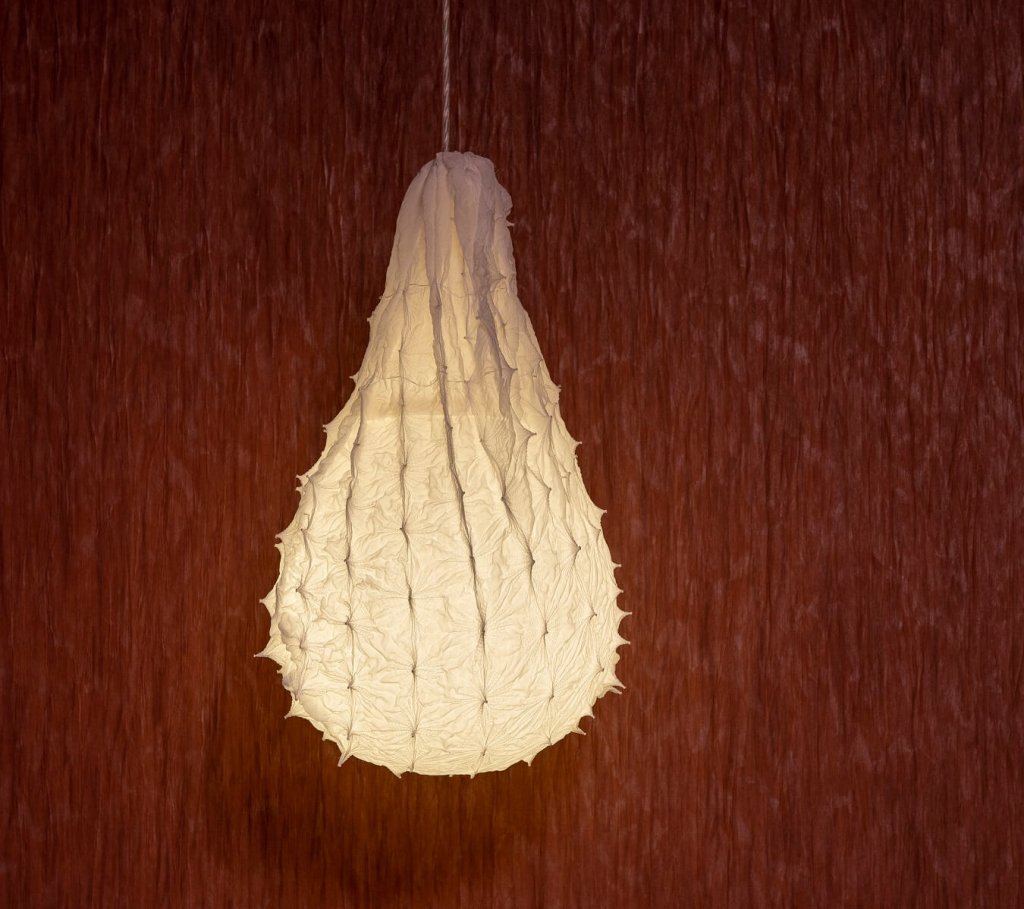 These lamps have adopted the technique of “spider squeezing”. Traces of iris remain firmly on the fabric and the protrusions of the fabric allow the light to diffuse, which gives a soft impression. White fabric is used for the light and shadow to be seen.

About KAI brand:
KAI is a leading brand of upscale boutique hot spring ryokans. Every establishment offers a contemporary take on the traditional Japanese inn, providing unique, location-specific experiences. From exclusive activities to specialty suites, KAI is an invitation to immerse yourself in the rich diversity of Japanese culture.