Behind the scenes of Hoshino Resorts in early 2020 - Microtourism

Hoshino Resorts have always been focusing on promoting new ways of travel and we are challenged to do so even more during this withcorona era. We will be starting a monthly series, giving you a look into how we strived through.

2020 was not an easy year for Hoshino Resorts, where the outbreak of Covid-19 had a major impact, especially during the beginning of the outbreak back in early 2020. 7 out of the 42 properties were temporarily closed, and 5 properties that had been planned to open during March through June were all postponed. During April and May 2020, when the state of emergency was declared, profits decreased by 80 to 90 percent so staff members were furloughed.

To prevent the staff from worrying too much or take issue with the global outbreak and company survival excessively, CEO of Hoshino Resorts, Yoshiharu Hoshino (hereinafter referred to as Hoshino), created and shared an 18-month survival plan back in April 2020 just before the state of emergency was declared. Assuming that vaccines and/or cure will be ready in 18 months and with reference to the movements of the Spanish flu, the survival plan was a model to give hope and a temporary goal to aim for, showing the expected correlation between travel demand and infection rates within an 18-month period. Hoshino states that it is important not to be overanxious and so, even if profit decreases by 80 to 90 percent (which was the actual case back in April and May 2020), it will be regarded as an expected decrease and within the scope of the plan. This 18-month survival plan was just one of the many thoughts and ideas Hoshino shared on his internal blog in order to survive the unprecedented times. (How the past (almost) 18-months turned out to be will be shared at the end of this article.) Hoshino thought that it was an important job for him to eliminate or at least reduce the worries. Normally, Hoshino makes a post every 2 to 3 weeks on his internal blog but he increased the frequency to once a week, achieving an increase in the amount of outgoing information. Since then, Hoshino has been posting articles on various topics including the roles of tourism, the company’s duty, and even the probability of bankruptcy.

Furthermore, as a company, survival is key, and it was important to focus on capturing and maximizing this once-in-a-lifetime travel demand. This was the start of new ideas and programs at Hoshino Resorts, including today’s main topic, microtourism.

Microtourism is a great way of travel that balances the local economy with minimum impact on the spread of the virus. Below are the details of microtourism as we will be sharing some of our actions and results in the next newsletter. We hope these can lead to new ideas for the travel industry as well as an entry point for future guests, once border restrictions are lifted, to discover the different experiences we offer.

Microtourism is a small trip or short travel to a place that is 1 to 2 hours away from home by car. We believe that there is always something new to discover, whether that is new culinary combinations of local produce, hands-on experiences of local art, etc. whilst staying close to home, where we can feel safe. 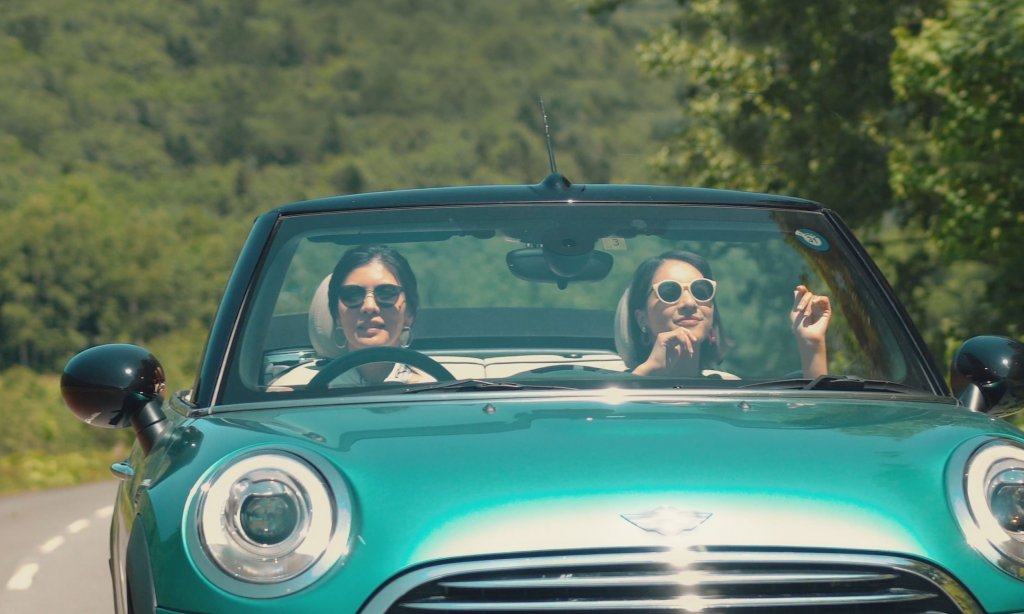 Importance of the idea of trade areas over prefectures

Hoshino’s idea of microtourism is more focused on travel between trade areas over entire prefectures because the idea is based on wanting to create tourism demand for regions rather than for prefectures. In Japan, travel across prefectures was restrained in May and June of 2020, and this led the tourism demand to drop by 90%. Hoshino thinks that if microtourism between trade areas were in consideration, restrictions across the entire country would have been avoided, allowing room for travel between regions (with low infection rates) to occur, and hence the decrease in tourism demand would not have been as severe. For example, restricting travel between Hakone (Kanagawa Prefecture) and Tokyo is necessary, since Tokyo has a high number of infection rates relative to other prefectures in the country. However, there is a high percentage of tourists from Mishima (Shizuoka Prefecture) to Hakone so without focusing on opening the prefectural border but rather its “regional border,” then 30 – 40% of profits could have been saved.

With these things in mind, if microtourism between trade areas had been practiced, the critical situation for the tourism industry in Japan with a decrease in demand by 90% could have been avoided, possibly stopped to about 40 – 50% decrease. 90% decrease is a devastating number; however, a 40% decrease could have given hope and the motivation to create possible solutions for survival and for the tourism demand to be maintained during the withcorona era.

Despite the importance of the idea of trade areas for microtourism, the difficulty remains for the complete acceptance of this idea in Japan because tourism associations, hot spring associations, etc. are all differentiated by its prefecture, making it harder to work collaboratively between regions of different prefectures. Hoshino believes that more consideration towards microtourism between trade areas are required and new ideas to support the tourism industry during this time of withcorona era is key.

Results of microtourism
*Edited version of our previous report, “Efforts and Results of Microtourism” (released in October 2020).
For reference, please visit: https://www.hoshinoresorts.com/en/information/release/2020/10/30049.html

At each property operated by Hoshino Resorts, there has been a focus on “microtourism” since June of 2020, which was after the end of the state of emergency. In addition to avoiding the Three Cs (close contact, confined spaces, and crowded places), we reviewed our service and designed ways of travel for the locals.

Below is a report on the results of our efforts, including real examples.

Shift from international to local guests 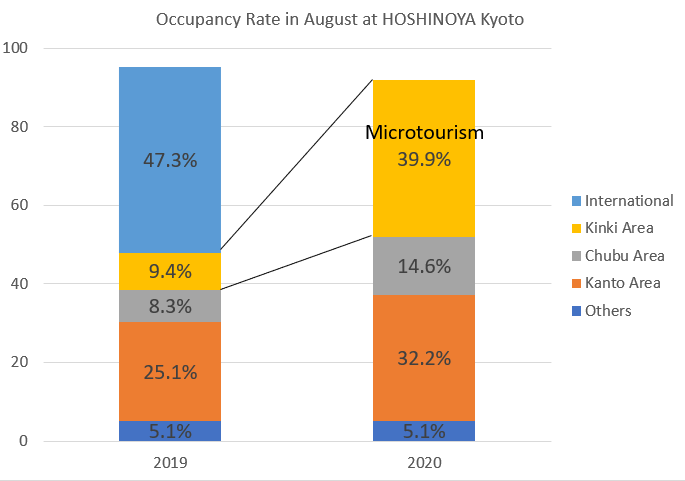 About half of the guests at HOSHINOYA Kyoto, operated in Arashiyama, were international guests. Through “microtourism” with the theme of “a day to experience Kyoto culture in Oku-Arashiyama,” the percentage of local guests from the Kinki area grew from below 10 percent to nearly 40 percent and the overall occupancy was maintained at approximately 80 percent. 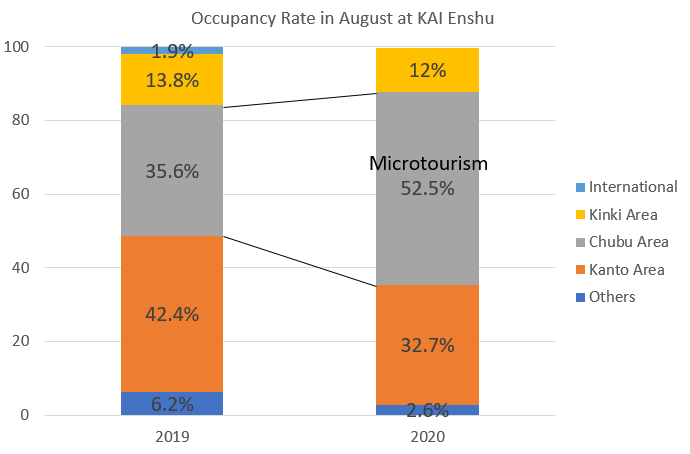 Shizuoka Prefecture is famous for its green tea and KAI Enshu creates a stay experience using these teas. At KAI Enshu, charms of tea were proposed through the introduction to tea baths and tea fields at various and yet limited (during the pandemic) touchpoints with the guests. As a result, approximately 60 percent of guests were from the local, Chubu area and the overall occupancy rate exceeded 90 percent. 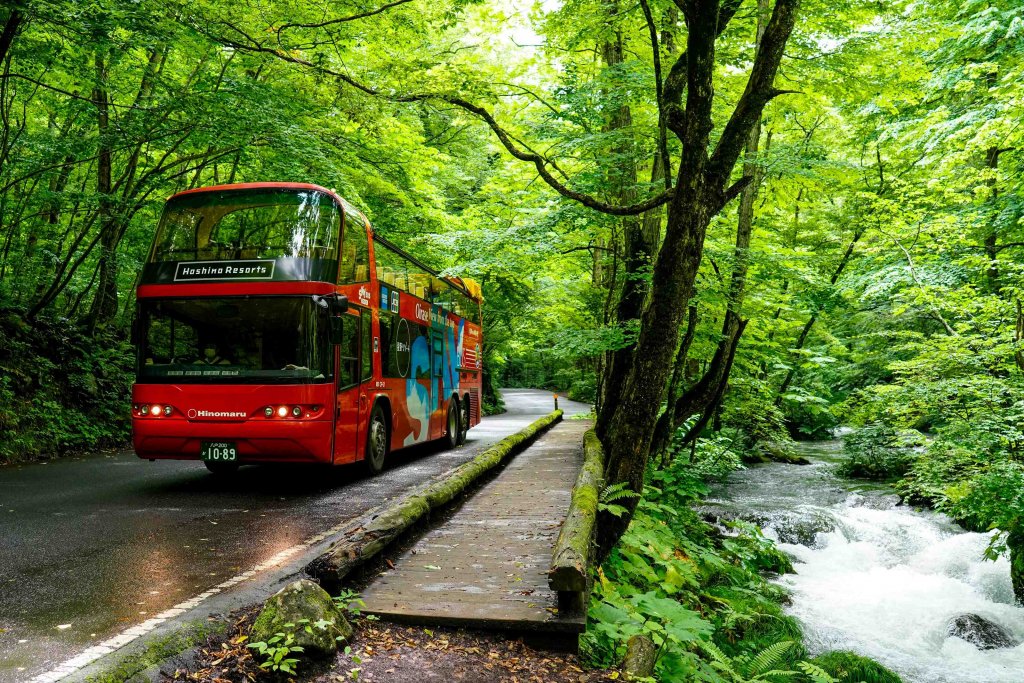 One of the popular stay experiences amongst locals is the open rooftop bus tour in Aomori Prefecture at our Oirase Keiryu Hotel. A double-decker bus with an open rooftop will be traveling along the mountain streams, where guests can enjoy the 360 degrees panoramic view of nature.

Oirase Keiryu is a popular area for locals, but it was usually enjoyed by exploring on foot. There were no bus tours in this area, so we speculate that it felt new for locals to be able to easily enjoy the view without trekking through the forest, and hence its popularity. It is about the view and experience that cannot be replicated by a car ride, as one enjoys nature with the full use of their five senses and the fun guide by the bus attendant.

This 18-month survival plan, which illustrates the expected correlation between travel demand and infection rates within an 18-month period, was in fact accurate when looking at actual reservation numbers at Hoshino Resorts. As Hoshino predicted, the infection rates (gray curve) and reservations (red curve) are in an inverse relationship, and travel demands held strong during the second and third waves despite its unknown nature and lack of news on vaccines or cures because stay home practices can be stressful for people, maintaining a certain level of travel demand. With more news on the confirmed introduction of vaccine rollout in parts of the world and in Japan, the decrease in reservations by the fourth wave was not as severe as previous waves. 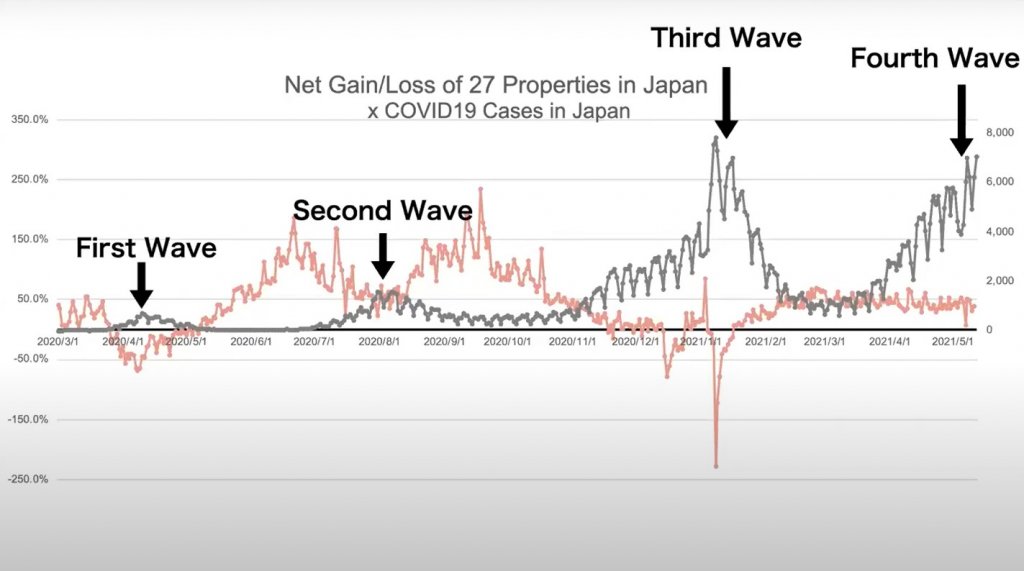