A Tour of
Breathtaking Places
in Okinawa

Why is Iriomote Island registered as a Natural World
Heritage Site? What are the charms of this island? Explore
Okinawa with Hoshino Resorts as we introduce five travel options.

Why is Iriomote Island registered as a Natural World Heritage Site? What are the charms of this island? Explore Okinawa with Hoshino Resorts as we introduce five travel options.

Why is Iriomote Island registered as a Natural World Heritage Site?

World Heritage refers to cultural assets and the natural environment that have been recognized as a value to be passed down to the next generation as a common property of mankind. Iriomote Island is a very important island for the "Amami Oshima, Tokuno Island, the northern part of Okinawa Island, and Iriomote Island" recommended by Japan, which was considered by the World Heritage Committee in July. Subtropical primeval forests cover 90% of the island, and 25% of Japan's mangrove forests are present. Moreover, it is the home of endangered species such as the Iriomote wildcats and Greater tip-nosed frogs. However, these are not the only attractions of Iriomote Island.
For example, there is an island's traditional event called "Shichi," which praises the abundance of the five grains, health, and prosperity. These island traditions contribute to our connection with nature, leading to the protection of ecosystems, and as a result, provides an "outstanding universal value" to the island as a Natural World Heritage Site. By following the conservation rules on the island, a feeling of gratitude for nature will arise and will be a great opportunity to enrich our lives.

Located at the southwest end of Japan, Iriomote Island has a circumference of about 130 km and a population of about 2,400.
Most of the island is covered with subtropical forests, which are fed by rivers of various sizes. The river flows through Japan's largest mangrove forest, wetlands, paddy fields, and other areas where people live, and flows into the sea where colorful coral reefs and tropical fish live. It is home to a wide variety of animals and plants, including endangered species such as the Iriomote wildcat, the Crested serpent eagle, the Yellow-margined box turtle, the Bamboo orchid, and the Silver-leaved mangrove.
Biodiversity, which is nurtured by the connections between various natural environments, is a major reason why Iriomote Island has been nominated as a Natural World Heritage Site.

The Iriomote wildcat lives only on Iriomote Island and it is a subspecies of the Bengal wildcat that lives in Mainland China. The weight is about 3 ~ 5 kg, and it has features such as a thick and long tail, a long body, short legs, and round ears. The population is estimated to be about 100, making it a special natural monument of Japan and an endangered species.
Iriomote wildcats live not only in forests and wetlands but also in paddy fields, and they eat birds, rats, frogs, lizards, crabs, and sometimes even shrimp in rivers. One of the reasons why they were able to survive on the small island of Iriomote for a long time is because of the island's rich biodiversity. In recent years, the number of traffic accidents involving wildcats has been increasing every year. Please drive safely and carefully for these wildcats when you are on the island.

Park Ranger, Iriomote Island Nature Conservation Bureau for the Ministry of Environment Yasunori Takenaka
After working at Joshin'etsukogen National Park, Kushiroshitsugen National Park and the Japanese Embassy in Brazil, he came to his current position in August 2018.

From Ishigaki Port, where ferries leave from Ishigaki Airport to different remote islands, travel on a high-speed boat or ferry. There are two routes connecting Ishigaki Island and Iriomote Island, and there is a shuttle bus from Uehara Port to Hoshino Resorts Iriomote Hotel. 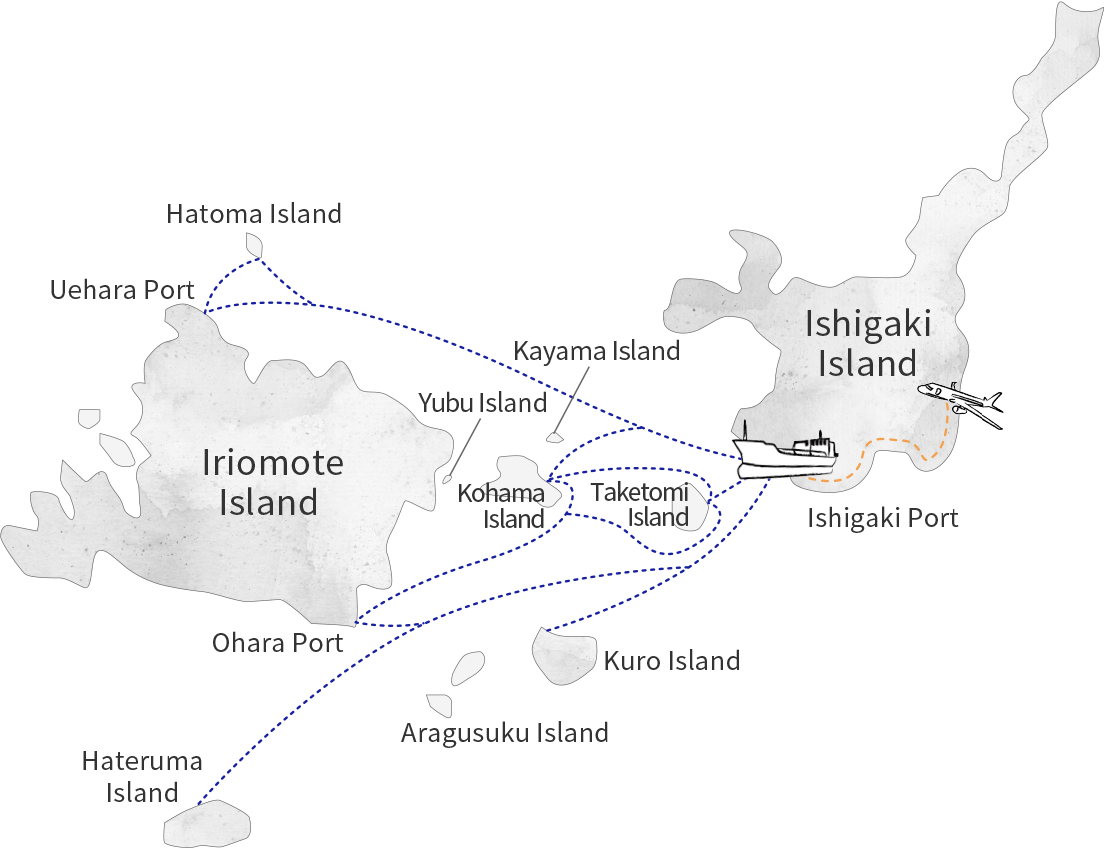 The Road to the Registration of Iriomote Island, Almost Entirely a National Park, as a Natural World Heritage Site

The New Endeavors of Picchio: Living in Harmony with Wildlife

To the Interview Overview

Aiming to become Japan's first ecotourism resort, our hotel will make use of the knowledge of environmental management accumulated by Hoshino Resorts. We will protect the natural environment of the island and build a sustainable tourism system.

About 10 minutes by boat from Ishigaki Island. With the spirit of "Utsugumi," which means cooperation and unity, the village and traditional culture of Taketomi Island are preserved. Enjoy a special stay in a remote island village, with independent guest rooms based on traditional architecture, meals where local ingredients from Okinawa and the island are prepared with French techniques, and cultural activities.

It is a small island surrounded by coral reefs with beautiful beaches in a village where the original scenery of Okinawa remains.

A resort hotel located 25 minutes away from Ishigaki Island, surrounded by some of the world's best coral reefs and white sand beaches. The guest rooms are all suites and there are 60 villas scattered around the vast premise. Enjoy a luxurious time at the beach of a private island, either with a backdrop of the golden sunrise or the starry skies.

Located in the middle of the Yaeyama Islands, Kohama Island is known as Yaeyama's Tembusu (bellybutton) and as a tranquil island with sugar cane fields.

All rooms have ocean views and are along the coastlines. Guests can always feel close to the ocean wherever they are on the premises and spend a carefree time. This is the result of careful design, such as the infinity pool leading to the ocean, available all year round, as well as the spacious guest rooms situated along the coastlines, bringing in the panoramic view and ocean breeze.

About 60 minutes by car from Naha Airport

Opened in Naha, the largest city in Okinawa Prefecture, on May 13, 2021. We consider the entire city, which has nurtured a unique atmosphere since the Ryukyu dynasty, to be part of the hotel, and we propose a new stay in Naha that will make guests' hearts flutter with excitement.

May 1972
Upon the return to the mainland and the return of Okinawa to Japan, it became the Iriomote National Park

February 2019
Re-registration by the government